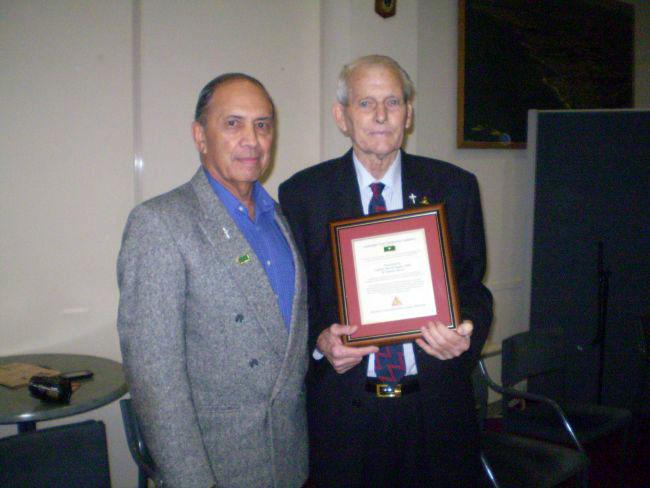 Morrie Stanley (right) with Willie Walker after being presented with his Australian Unit Citation for Gallantry at the Browns Bay RSA in 2010.

Extract from interview with Brenton (Boris) Beach, 5 and 8 August 2008

Reproduced with permission of the Stanley family

161 Battery forward observer Maurice Stanley recalls how the rules of engagement were negotiated by gunners in Vietnam.

There were some free zones, we could do training and so on. And infantry could patrol and shoot anything that moved. The gunners don’t initiate fire on their own behalf, except for harassing fire, and if there’s a contact for fire in depth at something. And that’s all managed by the task force, ie the field regiment. FOs would not usually be restricted by the rules of engagement for artillery. I can’t express it literally. There were very strict rules of engagement.  Very strict rules of engagement, as a result of accident or failing to conform with those rules there were casualties inflicted on the local population. I don’t know of any incidents in any of the Australian units where after a quick in-field investigation that it was unnecessary or unwarranted fire. Notwithstanding the fact that I saw an old lady shot. Now from our point of view the difficulty was in identifying the enemy. And given that the enemy’s aim is to shoot you anyway. Particularly the locals – children, boys, women and old men. You couldn’t assume that because they were not wearing uniform they were all going to be chummy. In fact there were a lot of really young men – I’m talking about 16, 17-year-olds – taken prisoner. And women. And I know there’s all sorts of books written about all the horrible things in Vietnam, and there’s some very prominent women taken… by Americans. But we had our own troubles identifying the enemy. We also knew the consequences of failing to identify an enemy.

He describes New Zealanders as 'the poor cousins' of the allied coalition in South Vietnam.

The fact was we were poor cousins. We didn’t like to feel we were, we would never admit that, but we were poor cousins. We were a very small outfit, a small country. We do a lot for a small country. We’re also very generous ourselves in helping our mates. The fact is, I think always, we’ve had difficulty in mounting our forces to go anywhere and that will always be for everybody I imagine, but everybody fighting the same war and when you’re under the command of an American outfit they’re your boss, they’re responsible for you and your operation. So I don’t see anything strange about it and you couldn’t call it bludging if we, which we often did, asked the (American 173rd) Airborne Brigade for several trucks to carry ammunition. They wanted the fire support, it’s not as if we were just equipping ourselves free of charge. Wherever possible we paid for what we had. I know a couple of vehicles were lost and were found in the Battery area, but that’s a different matter.

And shares his impression of Army of the Republic of Vietnam (ARVN) soldiers.

They weren’t respected a great deal. But they were becoming effective. That was the aim during my time, to have the place Vietnamised, and that was the purpose of the original training team, one of the purposes, to have a cadre of experienced senior NCOs and officers with the Vietnamese local units and help train them. Some of them may not have been well-motivated. They were still at home – I don’t know. They didn’t seem to be as aggressive in defence, I’ll put it that way, as we were.  …. You see, most of them were locals and they were fighting at home. Their families might not have been far away from where they were, and most New Zealanders regard that as a very uncomfortable situation and hope it never happens to us.