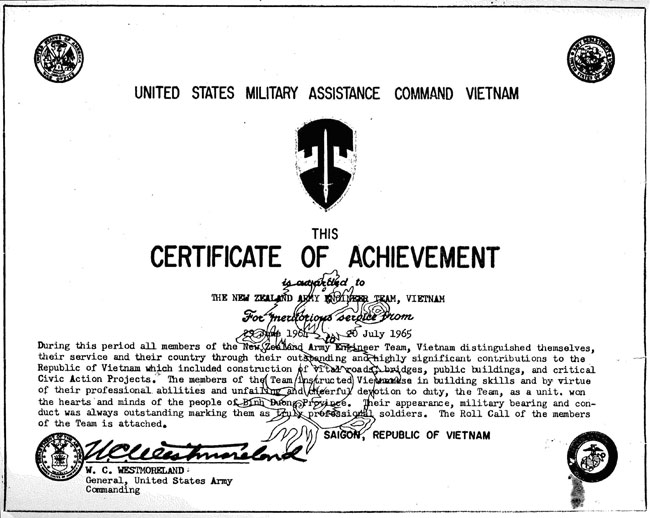 Certificate of Achievement given to the NEWZAD engineer team by United States Military Assistance Command Vietnam, 1965.

This Certificate of Achievement is awarded to the New Zealand Army Engineer Team, Vietnam [NEWZAD] for meritorious service from 29 June 1964 to 20 July 1965.

During this period all members of the New Zealand Army Engineer Team, Vietnam distinguished themselves, their service and their country through their outstanding and highly significant contributions to the Republic of Vietnam which included construction of vital roads, bridges, public buildings, and critical Civic Action Projects. The members of the Team instructed Vietnamese in building skills and by virtue of their professional abilities and unfailing and cheerful devotion to duty, the Team, as a unit, won the hearts and minds of the people of Binh Duong Province. Their appearance, military bearing and conduct was always outstanding marking them as truly professional soldiers. The Roll Call of the members of the Team is attached.

Keywords
newzad
How to cite this page: ' NEWZAD Certificate of Achievement ', URL: https://vietnamwar.govt.nz/photo/newzad-certificate-achievement, (Ministry for Culture and Heritage), updated 30-Nov-2021